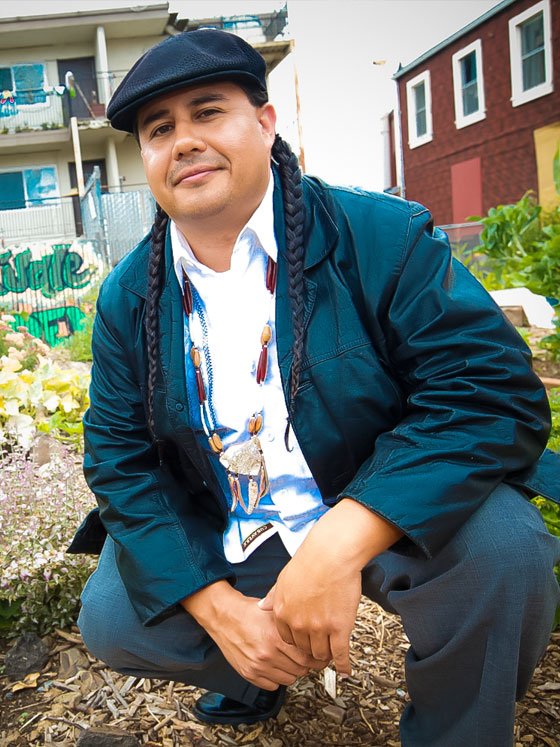 Since 1993, George Galvis has promoted restorative justice and healing to transform lives. Galvis is the Co-founder and executive director of Communities United for Restorative Youth Justice (CURYJ, pronounced “courage”). He draws from personal experience and his indigenous roots to help young people, particularly those involved in the criminal justice system, become community leaders for positive change.

Born and raised in the Bay Area, Galvis was exposed to profound domestic violence and drug abuse at a young age and experienced racial targeting and systemic violence growing up in his neighborhood. Seeking protection and belonging, he turned to gang involvement and street life. At 17, George was incarcerated and charged with multiple felonies related to his participation in a drive-by shooting. George broke the cycle of violence many incarcerated young men face by investing in his own leadership potential and that of other young people in his circumstances. Galvis’ experiences led to his life commitment as an advocate and organizer for elevating the power of young people most affected by criminalization and violence.

Galvis holds both a Bachelor of Arts in Ethnic Studies and a Master’s in City Planning from UC Berkeley where he was a Ronald E. McNair Scholar and Public Policy & International Affairs (PPIA) Fellow. He has conducted and published extensive, primary research on alternatives to gang violence utilizing culturally and spiritually based approaches.

Galvis advocates for at-risk youth, prisoners and formerly imprisoned individuals with children. As a board member of Legal Services for Prisoners with Children, Galvis helped create All of Us or None, which fights for the rights of formerly and currently incarcerated people and families. He has led statewide advocacy efforts to transform punitive school and juvenile justice policies that disparately impact youth of color and has developed traditional rites of passage programs as healthy alternatives to gang violence. He also serves as the co-Director of the California Alliance for Youth and Community Justice (CAYCJ), a broad coalition working collectively to end youth incarceration, youth treatment as adults, and build community capacity for alternatives to incarceration that empower young people in California.

Galvis was a leader of the Stop the Injunctions Coalition, which became the first community organizing effort in the nation to fully defeat a gang injunction in 2015. In addition, George has sponsored numerous state youth justice legislation and is a co-author of California’s Proposition 57 passed by voters in 2016. He has been a keynote speaker and presenter at schools, lock-down facilities, universities and conferences throughout the country and abroad, including the United Nations. George has been recognized by the Bay Area News Group & Comcast as a Hometown Hero and is a recipient of the 2013 California Peace Prize from The California Wellness Foundation.

George’s greatest achievement is his family. He is a loving husband to Catalina Garzon Sandoval and proud father of three beautiful daughters and wombyn warriors in the making Mikaela, Ayacaxtli, and Quillari. His daughters and family inspire him every day to be a better man.